The theme of T4G/18 is about being distinct from the world. The usual suspects led the conference: Mohler, Dever, Duncan, Mahaney, DeYoung, Piper, MacArthur, Chandler, Anyabwile, and Platt.

What began as a friendship between four pastors from across denominational traditions has burgeoned into a biennial conference for thousands of pastors and church leaders who, for all their differences, are committed to standing together for the main thing—the gospel of Jesus Christ.

Over a decade of consequential gatherings focused on expositional preaching (2006), biblical theology (2008), the gospel (2010), conversion (2012), evangelism (2014), and the Reformation (2016), T4G has sought to reaffirm and reiterate the central doctrine of the Christian faith and to encourage local churches around the world to do the same.

The ensuing years have brought with them many new faces, along with seismic cultural shifts and challenges for Christian ministry. And yet the conference has grown as more and more pastors discover that they share the same gospel-centered ambition.

Twelve years ago, at the inaugural T4G, we adopted a series of theological positions in the form of affirmations and denials. “We are convinced,” we wrote, “that the Gospel of Jesus Christ has been misrepresented, misunderstood, and marginalized in many Churches and among many who claim the name of Christ.”

As false gospels circulate and pastors are tempted to bow to cultural pressures, we remain convinced that the church is in a moment of spiritual crisis. Going on twelve years, buoyed by Christ’s promise that the gates of hell will not prevail against it, we remain convinced of the need for a full and gladdening recovery of the gospel in the church.

9Marks and the North American Missions Board (NAMB) partnered with Send DC to hold a one-day conference on church planting and revitalization in DC.  This year’s focus was “Understanding the Basics for Planters & Revitalizers”. 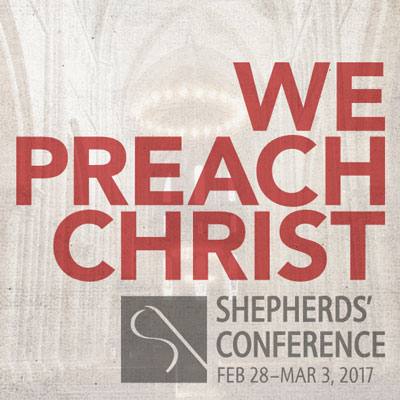 The audio and video of the 2017 Shepherd’s Conference is now available. The General Session speakers in order of appearance are:

A great many other wonderful speakers in the breakout sessions include Paul Washer and Michael Grisanti.

Mark Dever and Jonathan Leeman of 9 Marks talk about why churches, and Christians, fail to engage in one of the most fundamental privileges and commands we have as Christians. Dever offers helpful guidelines and models in how churches can pray and keep them organized and focused on moving from immature prayer to mature prayer.  This discussion is very helpful and practical for church leaders.

This Sunday, a vast majority of evangelical churches will gather for singing and preaching and reading Scripture and perhaps even a few baptisms and the Lord’s Supper. There will also be some praying.

In comparison to everything else, though, there will be just a little bit of prayer—a transition as a few musicians scurry off-stage, a quick “thank-you” to God after collecting the offerings, a prayer for God’s Spirit to work on the hearers of the sermon.

All in all, you might pray for a few minutes, almost always as a passive observer.

That’s the norm, and, on the whole, the norm is shocking, abysmal, and embarrassing. When it comes to verses like Colossians 4:2—“continue steadfastly in prayer, being watchful in it with thanksgiving”—our present-day churches have mostly failed.

So, what should we do about it? To answer that question, consider this interview with Mark Dever and Jonathan Leeman, in which they seek to diagnose and then address this problem of prayerlessness. We hope and, well, pray that it encourages us all toward more faithful obedience.

The Failure of Churches to Pray >>>

The conference titled Coming Home: New Heaven and New Earth sought to stir longing for our ultimate home in heaven as we explored the sweep of redemption from creation to consummation, from Genesis to Revelation. Through times of worship, prayer, fellowship and instruction, we sought to reaffirm the Bible’s teaching on eschatology and declare in word and song with joyful hope that Jesus is returning soon. Along with the nine main plenary sessions we had more than 50 workshops and focus gatherings led by speakers addressing topics including evangelism, homosexuality, student ministry, sexual abuse, faith and work, and more.

The Shepherd’s Conference has finished with a bang by MacArthur. This years conference has been titled The Inerrancy Summit, and it has assembled a stellar gathering of speakers: Alistair Begg, R. C. Sproul, Steve Nichols, Ligon Duncan, Carl Trueman, Mark Dever, Steve Lawson, Greg Beale, Derek Thomas, Al Mohler, Sinclair Ferguson, Iain Murray, Kevin DeYoung, and no I didn’t make this up.

Most of the sessions are on Vimeo, and more audio and video options will be coming later, I presume.

How do we help church members who prefer anonymity to love and open up to each other?

How should church leaders deal with tough cases such as divorce, illegal immigration, and in vitro fertilization?

Mark Dever and Russell Moore discuss how these issues and more with John Onwuchekwa and Derrick Morgan.

How to Handle Ethical Hard Cases >>>